This article provides information on safety when processing different kinds of polymers on 3devo's Filament Makers.

Check out our DIY guide to build your own fumehood

To safely work with the Filament Maker it is crucial that you do not burn the polymer that is being processed. When a polymer is burned, it will break up into smaller molecules. These molecules are harmful to human health and could be the cause of cancer, changes in genetics or problems with the reproduction system. Exposure to these fumes can also cause some acute issues. A polymer will burn when it is exposed to temperatures above its degradation point. The degradation point can be found on the datasheet that is supplied with the material. When working with recycled material there is often no datasheet available, in that case a general degradation temperature can be found on the internet.   When degradation does occur make sure that there is enough ventilation (working under a fume hood helps ) and you wear a protective mask. In the first link of the chapter ‘more information’ (below) is described what mask to use.

When a polymer melts under the right conditions, the polymer chains don't break as much and don't release as many harmful fumes as a burning polymer. However, when polymers are molten some small molecules are released. The amount and the type of molecules depends on the polymer that is being processed.

A study by Zhigui He E.A. (1) researched the release of harmful compounds during extrusion and concluded that harmful compound are released from the common materials used for extrusion. However, there is a big difference in the amount and types of fumes that are released between the different polymers. From all the polymers that have been processed in the study, ABS and PS were releasing by far the most harmful fumes and proper ventilation must be in place when processing one of these materials. For other polymers such as PE and PP, harmful fumes are also released - however, the amount was lower than ABS. Even though the number of harmful fumes is lower; it is still wise to work in a ventilated area when processing polymers.

Unfortunately, the study mentioned above did not look into the extrusion of PLA. Another study by Parham Azimi (2) concluded that when processing PLA below its degradation temperature, only lactide fumes are being released. These fumes are not harmful. Therefore, it is possible to work with PLA without any ventilation.

While we now know about the harmful fumes emitted from the previously mentioned polymers, to learn about safely processing a polymer, look at the material safety data sheet (MSDS) of the material. The MSDS provides all the information needed to safely work with a material. When reviewing the MSDS, we recommend having a look at Chapter 7 and 8, as they describe how to handle and protect yourself when working with a material. We reviewed the MSDS of ‘MAGNUM™3453 ABS Resin  Natural,’ to show you what you can expect. The following information was included: 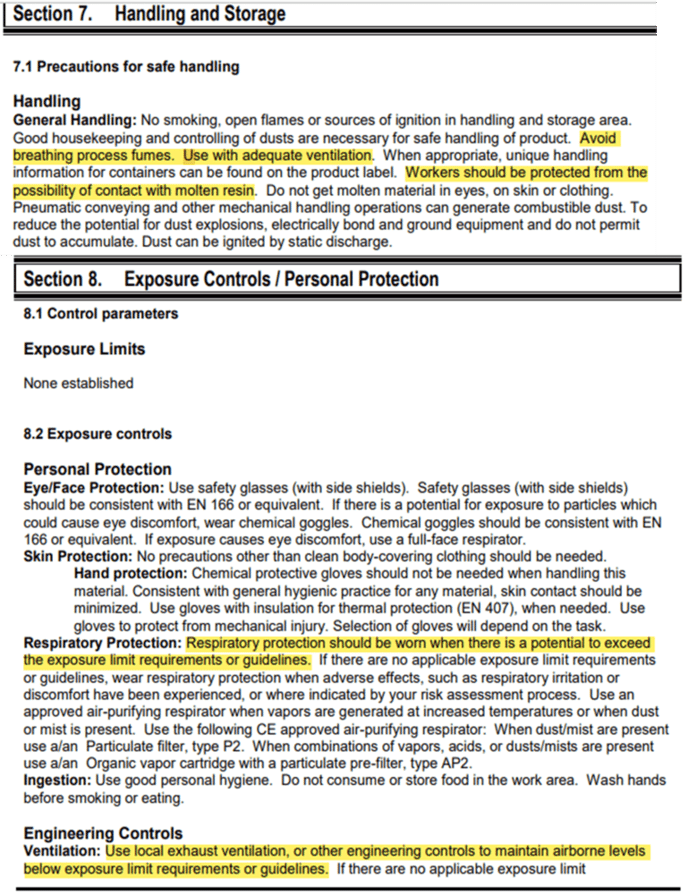 As visible in the figure above, when working with ABS it is vital that you work in a well ventilated area and if necessary, extra respiratory protection should be used.