Sometimes the produced filament has a rough surface. In this article are the possible causes and solutions of this issue explained.

Die lines are straight lines in the machine direction that remain in the same location on the extruded filament during operation (an example is shown in Figure 1 after an extrusion test with the polymer TPU). 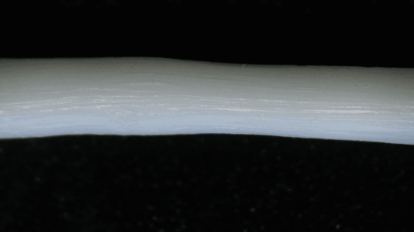 Lines/streaks on filament might also be caused by a phenomenon called nozzle lip build-up (Figure 2). This is when material remains around the edges of the nozzle, and seems to keep returning even after it is physically removed. This usually because the nozzle temperature is too low for the material which is being processed. This is especially problematic with semi-crystalline polymers because if the nozzle is below the materials melting point, it is very likely that the material that gets in contact with the nozzle solidifies again. 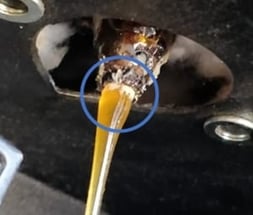 A machine direction streak may be caused outside the extrusion unit and nozzle, by dragging the product across something in the sizing operation (filament sensor and puller wheel) or on the take-up unit (positioner and winder). This is usually fairly easy to detect and correct. If the scratch is not present as the filament exits the nozzle but is seen partway down the line or on the spool, the problem is not in the nozzle. Determine where or what is scraping or damaging the filament surface after it leaves the nozzle and eliminate the problem. The most common cause here is a damaged puller wheel, see figure 3.

If the puller wheel’s surface is not smooth, this may cause streaks/lines on the filament. The only way to fix this is by replacing the puller wheel with a new one which can be bought at

When you have a new puller wheel available you can use the following guide to change the wheel.

Another reason why the produced filament has a rough surface is due to a distortion of the filament form. This distortion can have two causes.

Sharkskin is a phenomenon that can be recognized by the appearance of ridges present on the produced filament. This is also presented in the figure 4.

Another phenomenon that distorts the filament form is called melt fracture. This phenomenon is recognizable by the appearance of helical distortion on the outer layer of the filament. The distortion can be so severe that the filament spirals or small ripples appear. The figure below shows this.

Melt fracture occurs when the shear rate exceeds the critical shear rate. The critical value can be determined using a shear-rate/shear-stress diagram. When melt fracture is observed the following steps could help to solve the issue.

Increasing the temperatures of all heaters.

When reducing the screw speed, the shear rate decreases, reaching below the critical value and thereby solving the melt fracture.

Figure 6 summarizes the potential causes and corrective actions to employ when the surface of the produced filament is rough. 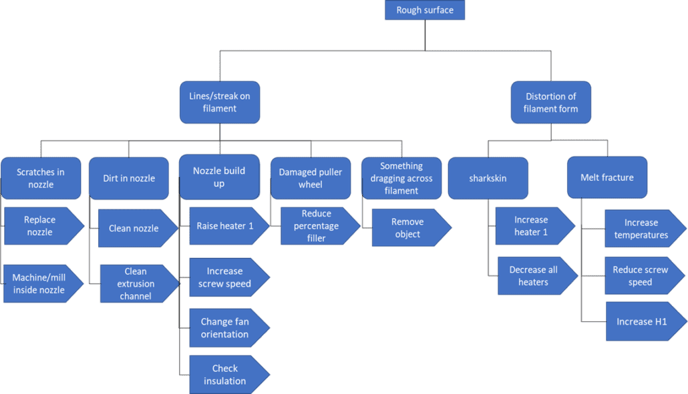 Figure 6: Summary of possible issues and corrective actions when encountering a rough surface on the filament