Sometimes when processing a material on the Filament Maker Abnormal amounts of smoke are generated. In this article is explained what is the cause of this smoke production and how this smoke generation can be prevented.

When processing a material it is possible the polymer released gas by itself. This are usually very limited amounts as is presented the figure below. 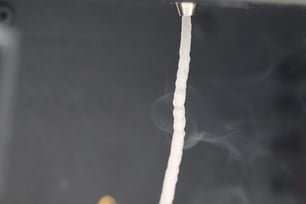 Degradation can occur when a polymer is processed at too high temperatures or under too much pressure. During the degradation of a polymer gas is released. The gas that is being released is caused due to the breaking of the polymer chains. The breaking of the polymer chains also causes the material properties to change. This process is further described in the article about polymer degradation.

Besides the gas that is released when a polymer is degrading some polymers also release gas when being processed such as ABS and Nylon. The gasses that are released when processing polymers like this can also be toxic. Therefore, it is crucial to read the polymer's Material data sheet (MSDS). When the polymer releases harmful gasses it is vital to work under a fume hood.

3. Chart with causes and actions

Figure 2 shows a summary of the possible causes and the corrective actions that should be taken when a polymer releases abnormal amounts of gas. 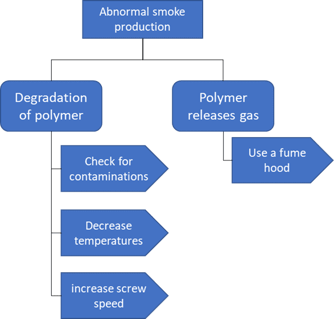